You are here:   Family History show > The Vodcasts > Episode 9 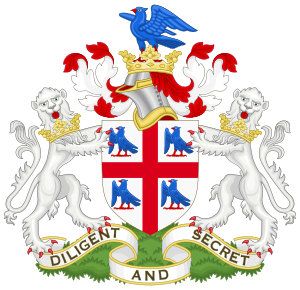 The coat of arms of the College of Arms (Photo credit: Wikipedia)

Are you curious about the possibility that your family may be linked to a particular line of pedigree or nobility? In Episode 9, Nick Baratt and Laura Berry takes you to a journey back to the golden ages of heraldry and the amazing coats of arms. If you happen to have done much family history research and you ended up with inquiries about an ancestor who had a coats of arms or pedigree, episode will introduce you to the ways in which the extensive archive of the College of Arms can help bring light to your research.

Nick will introduce you to Peter O’Donoghue, Bluemantle Pursuivant at College of Arms. After working as a genealogist, Peter became one of the heraldry authorities that may help you with your family research and inquiries on coats of arms and pedigrees. In this episode, Peter will take you to the many archives of registered coats of arms in the Queen’s realms covering the territories of England, Wales and Northern Irelands and as far as Australia, New Zealand and Scotland. If your family have roots from these realms, then watch how Peter and Nick discuses how the Coats of Arms have come about.

Peter narrates how the College of Arms has become the heraldry authority in all the Queen’s realms. He discusses how heralds like him have earned their herald status as well as the roles and responsibilities that go with it. He explains how heralds become an efficient body responsible in regulating and controlling the registry of coats of arms and pedigrees, dating back from the foundation of the College of Arms in 1484 until present time.

Nick and Peter will lay out the system followed in awarding coats of arms to certain eminent members of the society, which is either inherited through family lineage, marriage or heraldry tournament winnings. In the time when heralds became a prominent figure in the registry and grants of coats of arms, distinguished people of coats of arms where the main participants in the massive tournaments held during the Herald Festival. This tournament is basically an elite outdoor sport that captures the imagination of the people of class, which during that time meant those who own horses. Peter reiterates the role in played by the heralds in facilitating this exciting medieval tournament, which is closely bound together with the history of coats of arms.

Over the years of handling registry of coats of arms and pedigree, Peter explains how families have contributed to the change in the repertoire of the coats of arms. He also emphasizes that the system of heraldry that regulates the registry of coats of arms are valuable resources for genealogical searches as it reflects well the changes in the status of men of coats of arms through the complexities of family relations. These relations may be traced using the emblems, shields and symbols adapted by the family over the years. Laura steps in to show you how the extensive records and archives in the College of Arms can trace a particular ancestor.

In the time when military and chivalric coats of arms roamed the Queen’s realms, a system of heraldry were followed and remains to be followed during this modern time. Episode 9 will take you to the wonderful experience of going back to the world’s wonderful history as you get valuable tips and insights on how to verify facts from your genealogy research from the great heralds at the College of Arms.

About the College of Arms

Top Five Tips for Tracing Ancestors from the Nobility

Laura at the College of Arms